Or enter a custom amount

2022 has been one of the most exciting years yet. Regardless of all the struggles and hardships that this year also brought for me, I was able to capture and be part of some incredible moments. This post was inspired by a fellow blogger who suggest I do a visual publication of what I experienced this year. For this last blog post of year, here is the best of my 2022.

Here’s to the 2023 year being even more exciting, unexpected and wonderful than 2022. 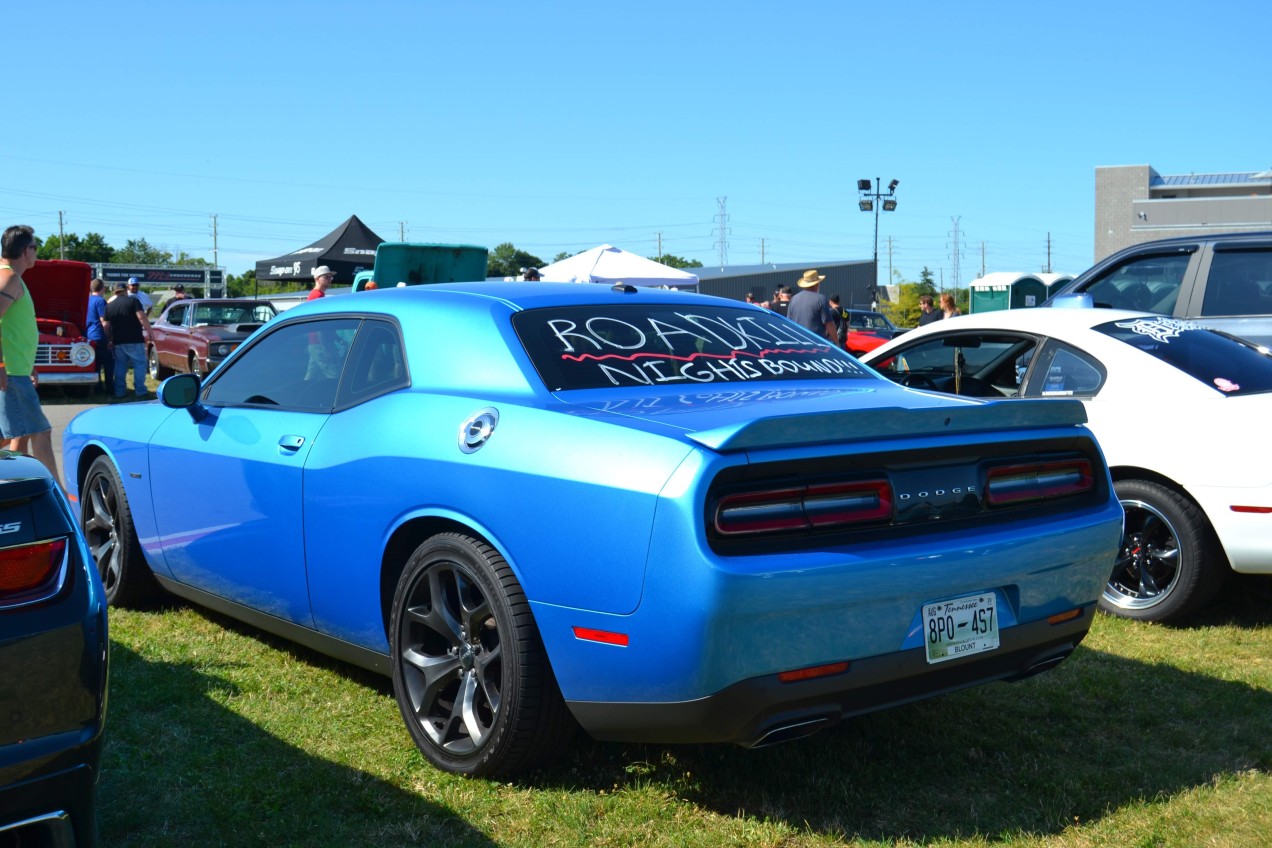 It’s been a while blog world. I have had a busy summer filled with car shows, events, new friends, new jobs just life in general. Since I was last here, I have continued to conquer autocross and Louisa won a few car shows. But perhaps the biggest adventure of all was a trip to Pontiac, Michigan this past weekend.

Some of you may have heard of Woodward Ave, some may not. I was one of the people who had not. For those who don’t know, Woodward Avenue is the heart of Pontiac Michigan. It is said that this was where the first ticket for street racing. This happened in March of 1895. The road first saw big spoked wheels and wagons. But in the 50s cars changed into something more reliable and became something we used to get from point A to point B. This 13 mile stretch naturally attracted a lot of people. Drive in diners started to pop up all along the road. Unlike today, a lot of these places were family owned. Coupled with the long wide stretch of road and automotive lovers in the surrounding area, it has taken its place in car history.

When spending some time with my boyfriend at the shop where he works he mentioned the event ‘Roadkill Nights’ that was happening the coming weekend (August 9th and 10th) in Pontiac, Michigan. He said he wanted to road trip out there. Famous last words of mine, I said, ‘let’s do it’. The following week consisted of getting his Caprice road ready and a little more safe for us to travel in. We looked at the route, 11 hours, 685 miles, not too bad! Then we realized that was going through Canada which we couldn’t do. So instead it was 13 hours and 764 miles. Meh, still not bad.

I was sitting at work dying for it to be the weekend so we could head out. We decided it would be best to leave Thursday night in the early morning so we could get there Friday evening and have a little time to explore.

My alarm went off after only getting 3 hours of sleep. I was still pumped though and ready to go. We packed up really quick, loaded the car and were ready to go. I was in charge of the route. It was dark, quiet. It was 1AM. No one was around. We headed out towards Keene and hit a long stretch of road in Vermont, Route 9 (more to come on this road later). We stopped at some rest stops along the way, I slept through a lot of the morning driving. We stopped for breakfast in Weedsport, New York at a place called Cook’s Village Diner. Small, a lot of locals.

It was good! Bacon makes any day better. We continued on in to Pennsylvania Welcome Center, took a quick break and hung out in the grass. You could see out into the distance forever. The day was beautiful. 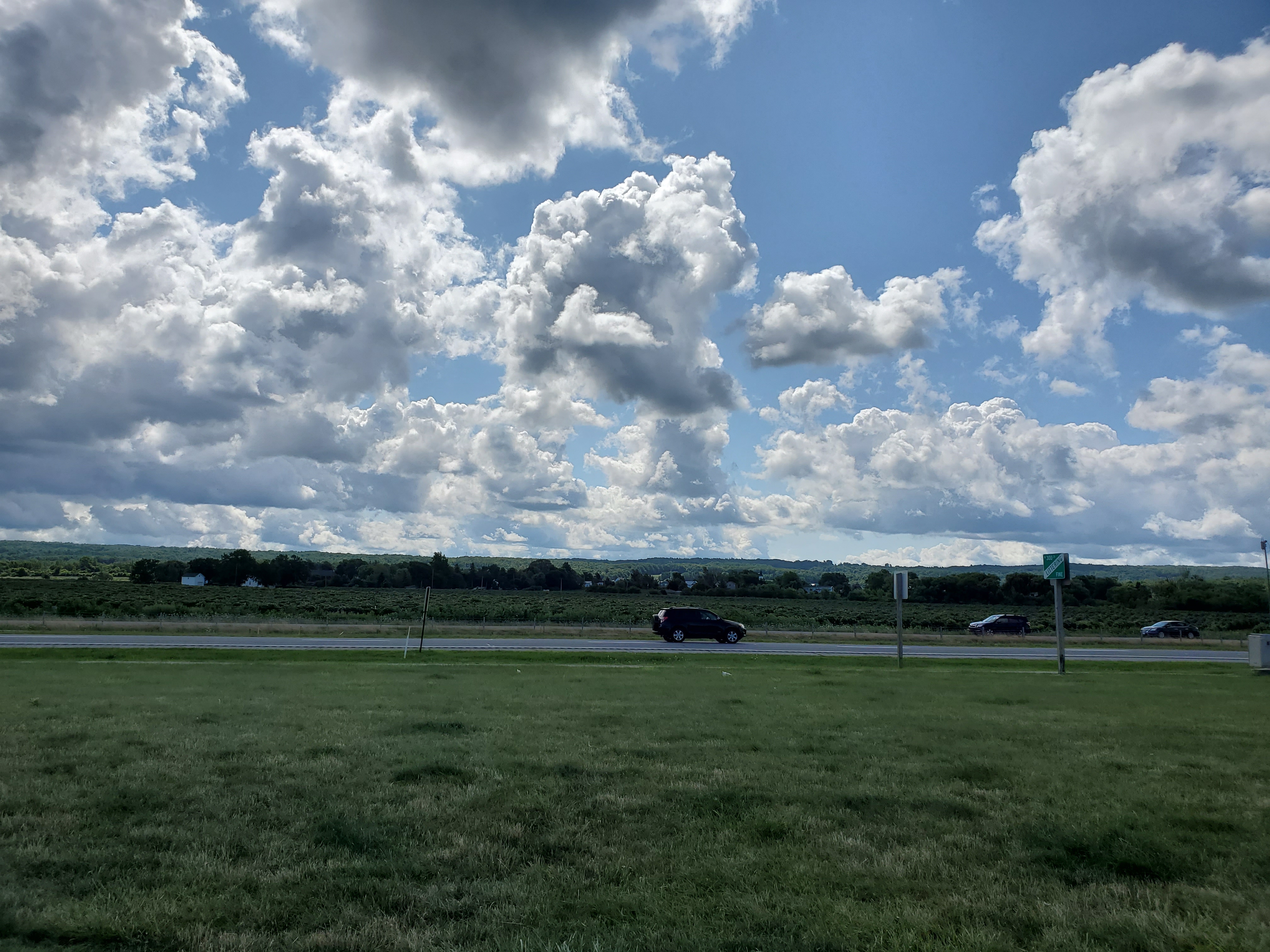 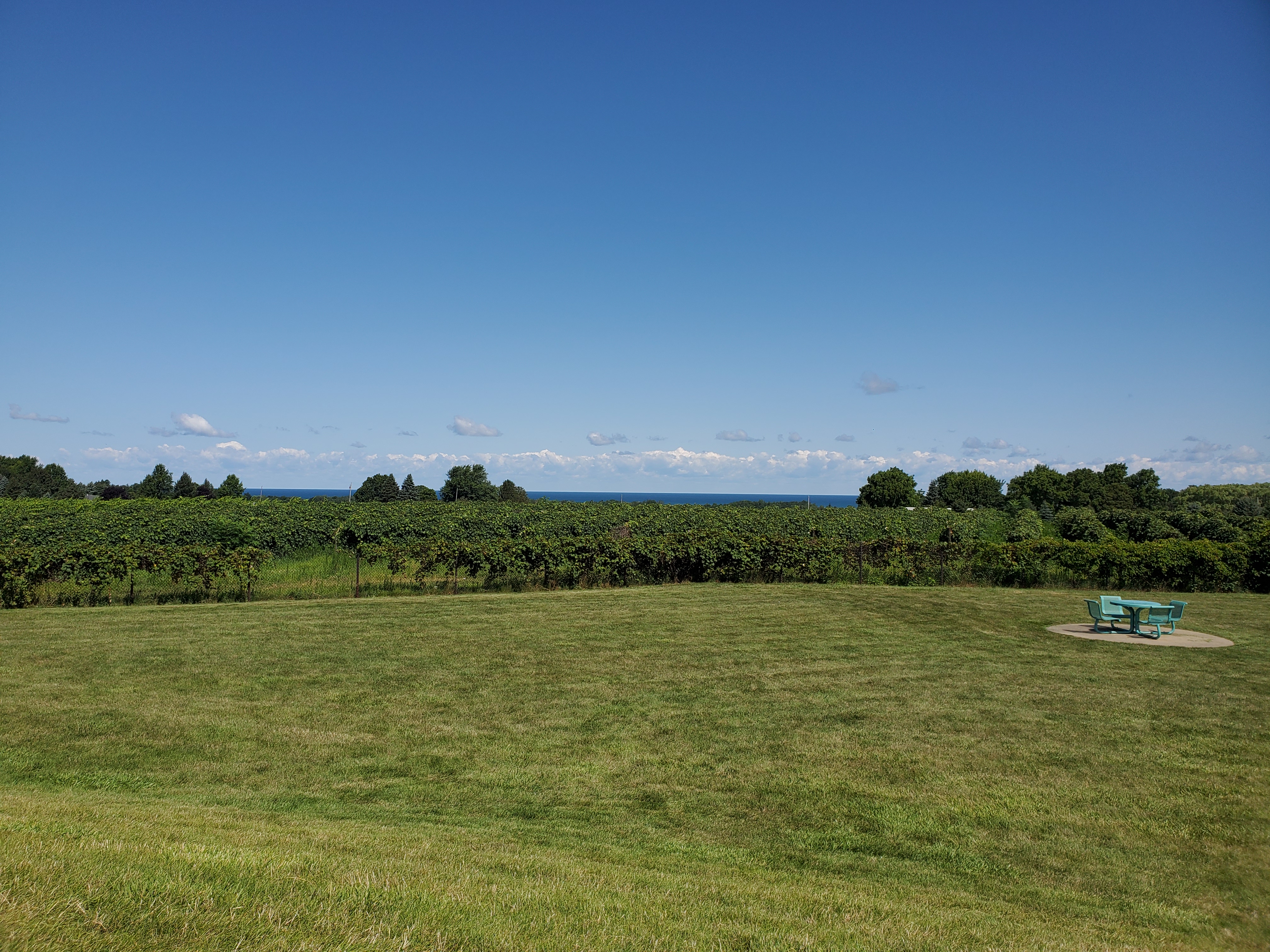 We stopped again in Erie, Pennsylvania at a place called Tasty Bowl for lunch. I had broccoli, rice  and chicken and tried sushi for the first time. (Yes, it was indeed, Tasty.)

Driving definitely takes a lot out of you, or in my case, being a passenger takes a lot out of you. We stopped again in Avon Ohio for some nuggies at Wendy’s and a trip to Goodwill. Thrift shopping is fun, don’t knock it til you try it! By he time we left it was about 3:30PM. We had a little less than 4 hours to go until we would reach the hotel.

At 7:00 PM we finally reached destination number one Courtyard by Marriott. We checked in and it was definitely time for a shower and a nap. The schedule events for Friday were done, but we went cruising around anyways. There were some cool cars still out and about rolling through the streets of Pontiac. We went to a place called Moose Preserve Bar & Grill for some dinner and drinks. It had been a long 20 hours. But we made it. The fun begins tomorrow.

For someone who was only able to sleep for like 5 hours in the past 30, I was feeling pretty good. It was likely because I was just so excited to get started on the day. We had picked out breakfast the night before so we could just get up and go. We decided on a place called Kerby’s Koney Island. It was ironically right across the street from the place we went to the night before. The inside was cute, it looked it had been there for a while. We sat at the little counter across from the open kitchen. Staff was friendly, and you could tell that they had worked together for a long time. Requests were met with curiosity for their own personal cooking and carried out wonderfully. I’d come back again.

Next it was off to Woodward Ave for the main event. There were several lots off site that we needed to be shuttled to the event from. The shuttles were old schoolhouses, and I emphasize the word old. I’m more of a nervous person than not, I freak out on the T in Boston when it goes over a bump, this was something else. ANYWAYS when we arrived and got off the bus (and even little before that) we could hear the screeching of tires burning rubber. My boyfriend turned to me and asked if those were tires, I laughed and said “hell yea, I think so.”

First up, we needed to check in with MotorTrend, a subscription service to various car videos, builds, drag racing, you name it. Being a subscriber gave you access to the MotorTrend Lounge which was out of the sun, had free snacks and drinks and gave you one free beer (to start at noon). There were also a number of people who would be there throughout the day that you could meet and have sign stuff and chat with. The out of the sun part was the best to me. They also gave you a fastpass to the Dodge Thrill Rides, which was where all the tire screeching was coming from. In one section there were Dodge Chargers and Challengers drifting around course taking people for thrill rides. Our fastpass was for 2:30-3:00, so we had to wait a little bit.

First up was the concourse, the section set aside for people who registered and wanted to show their car. Most of them were Dodges, and rightfully so I suppose, but there was a lot of other cool stuff to see as well.

Like this Prowler and Viper sitting pretty side by side 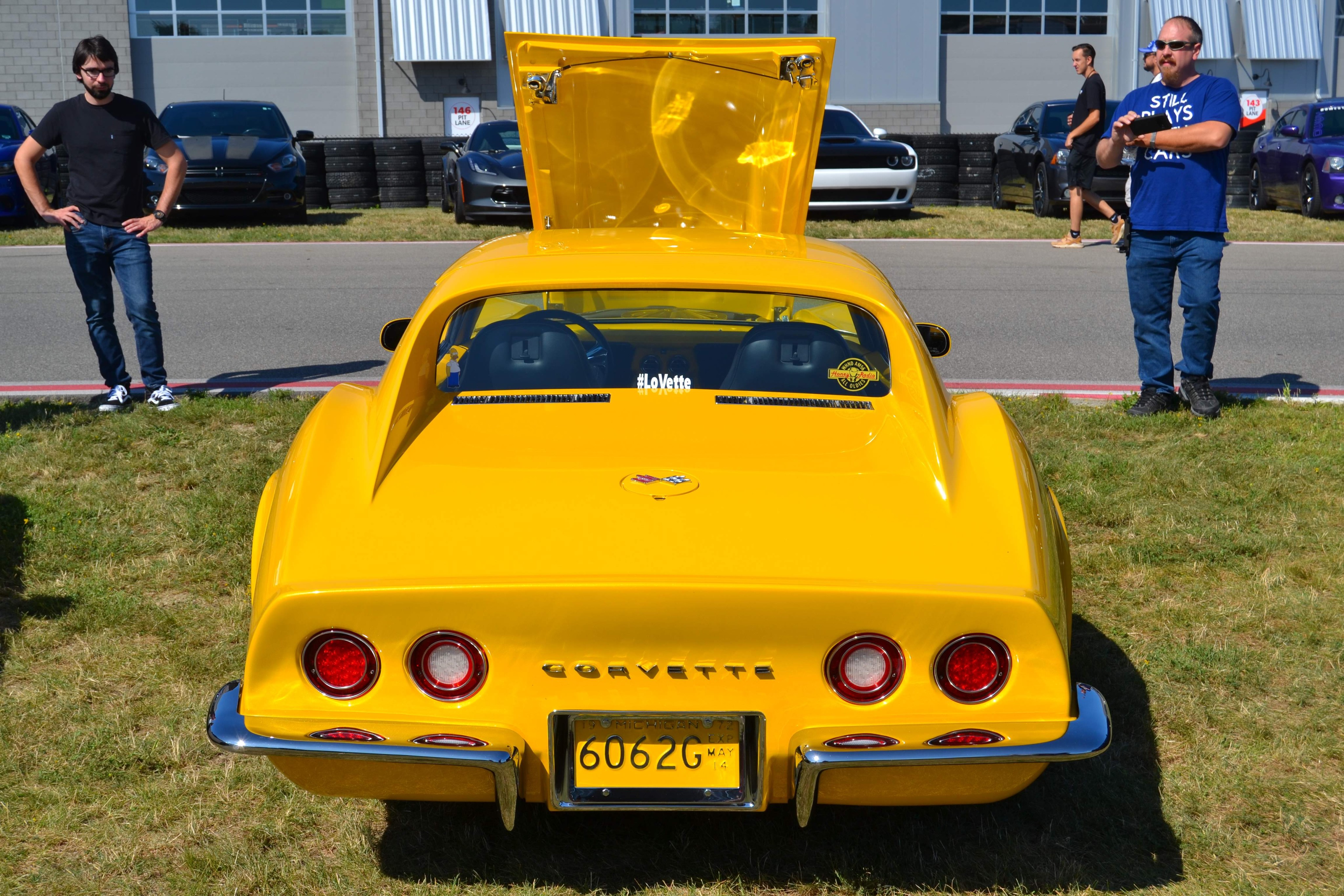 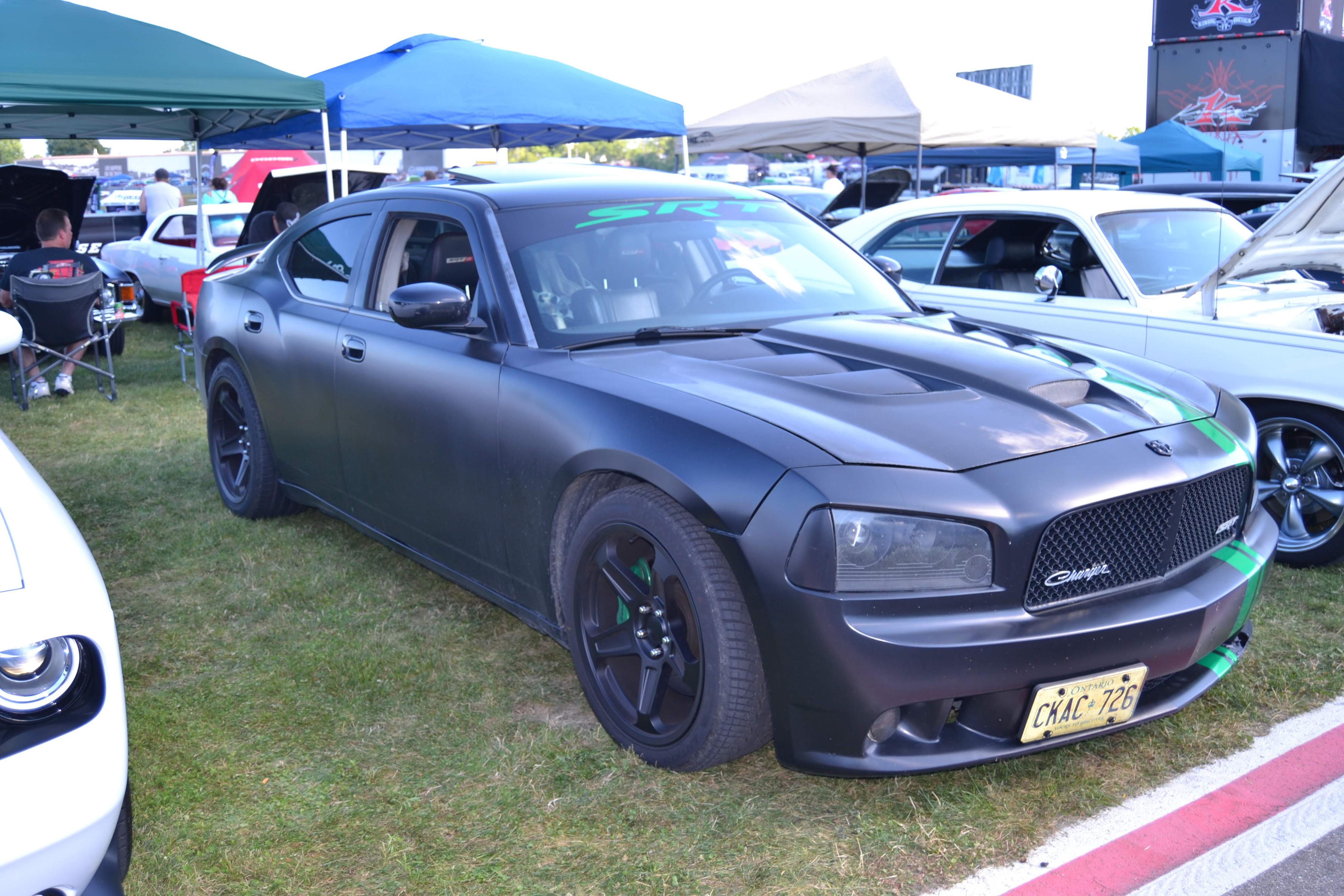 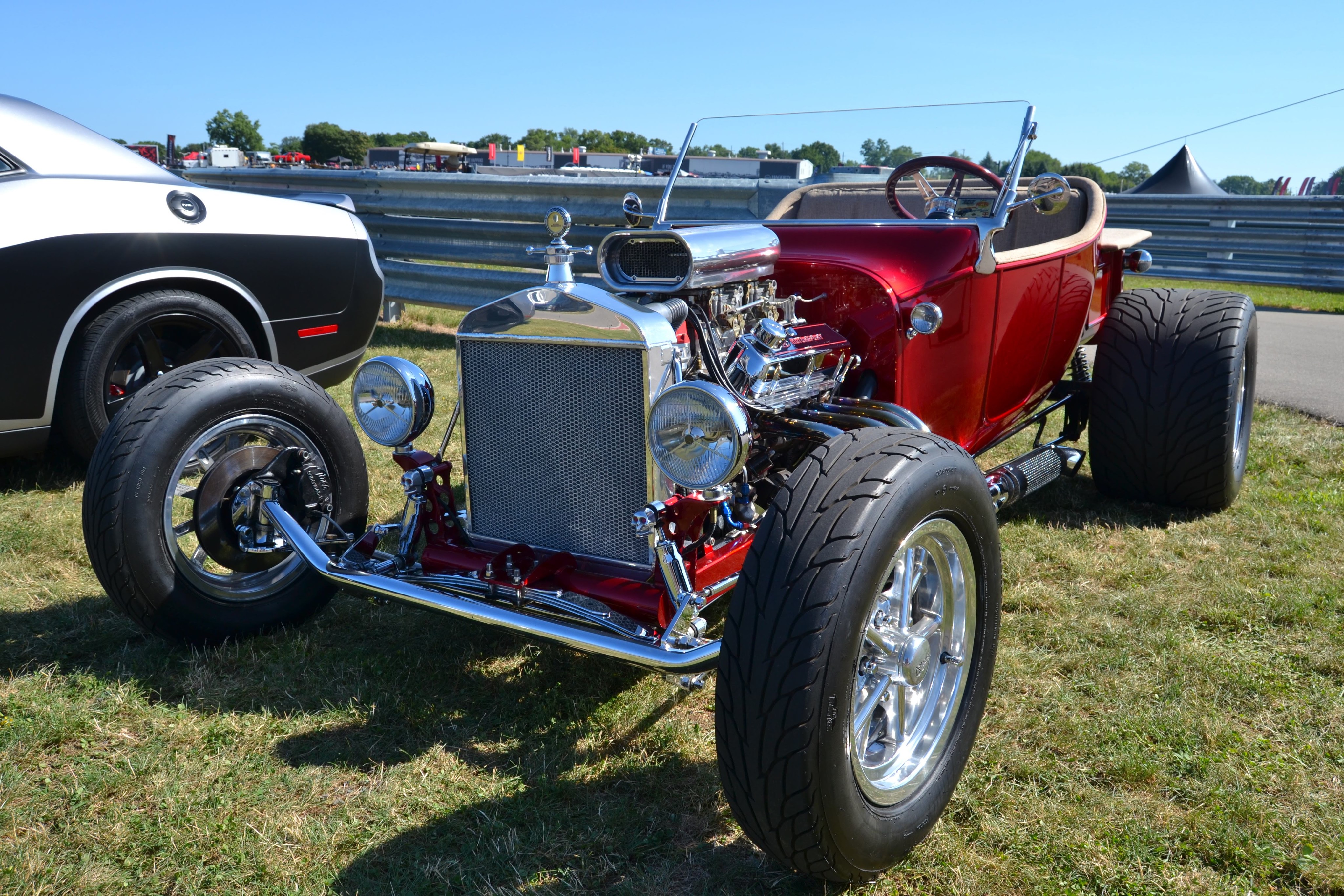 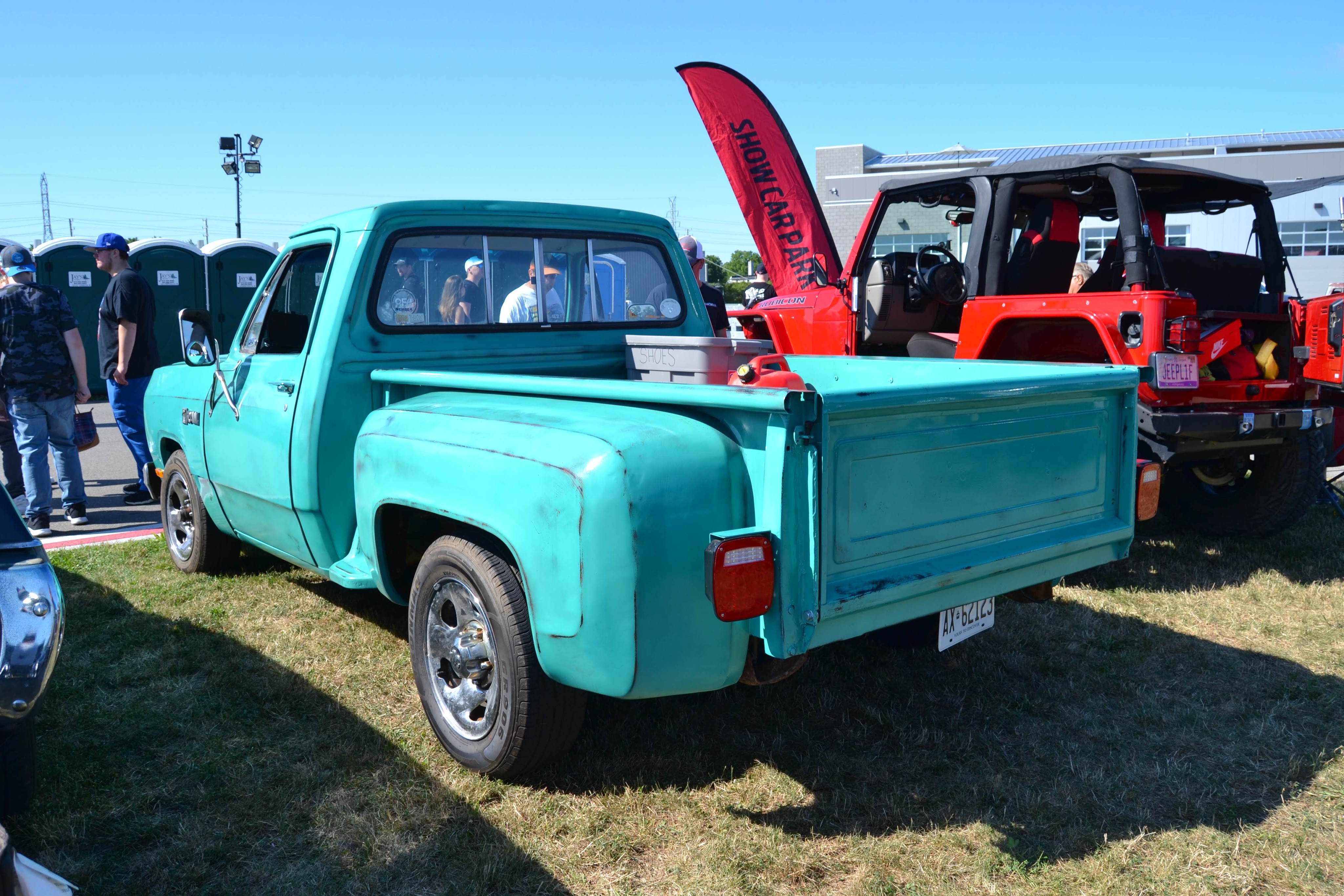 A mixture of things 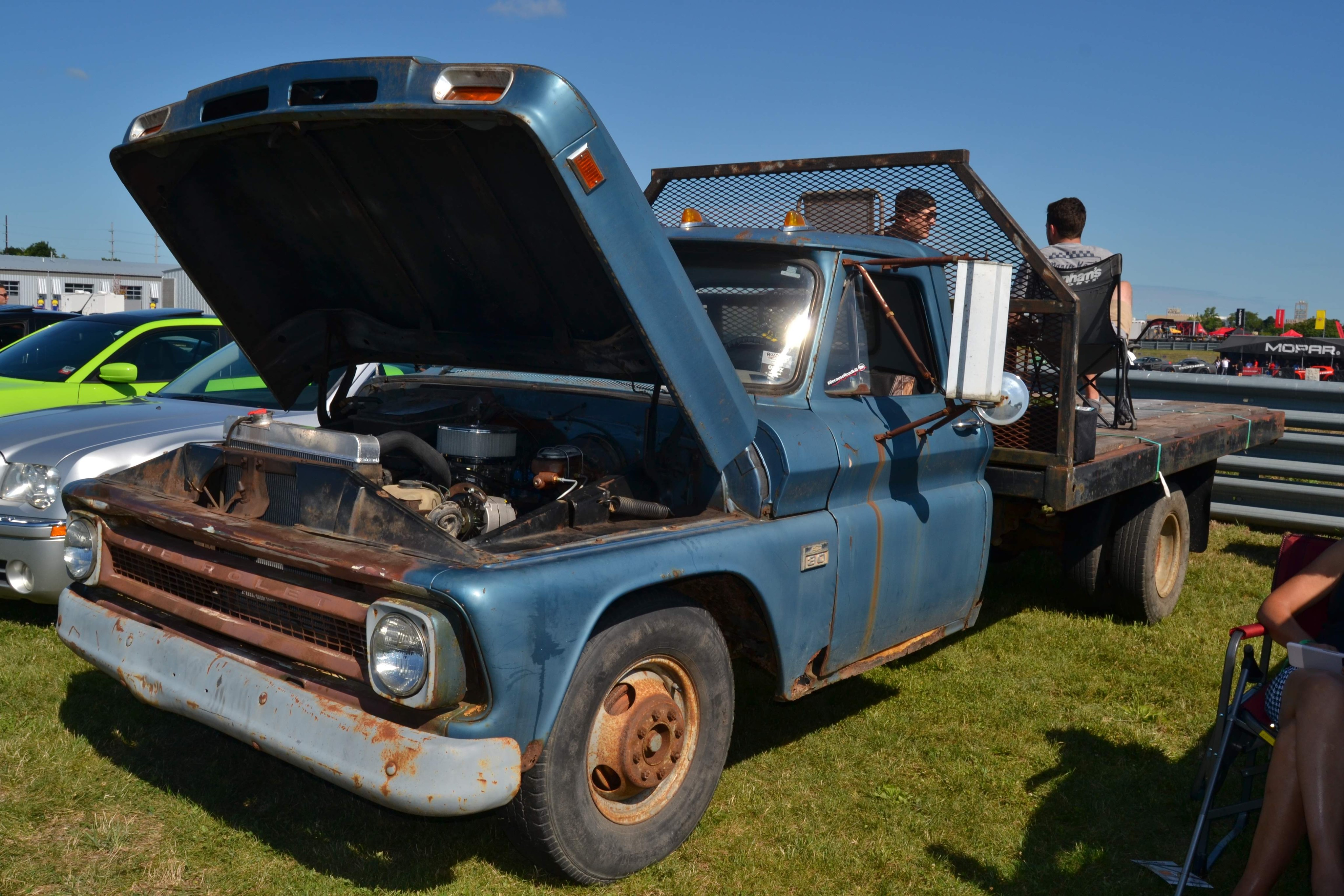 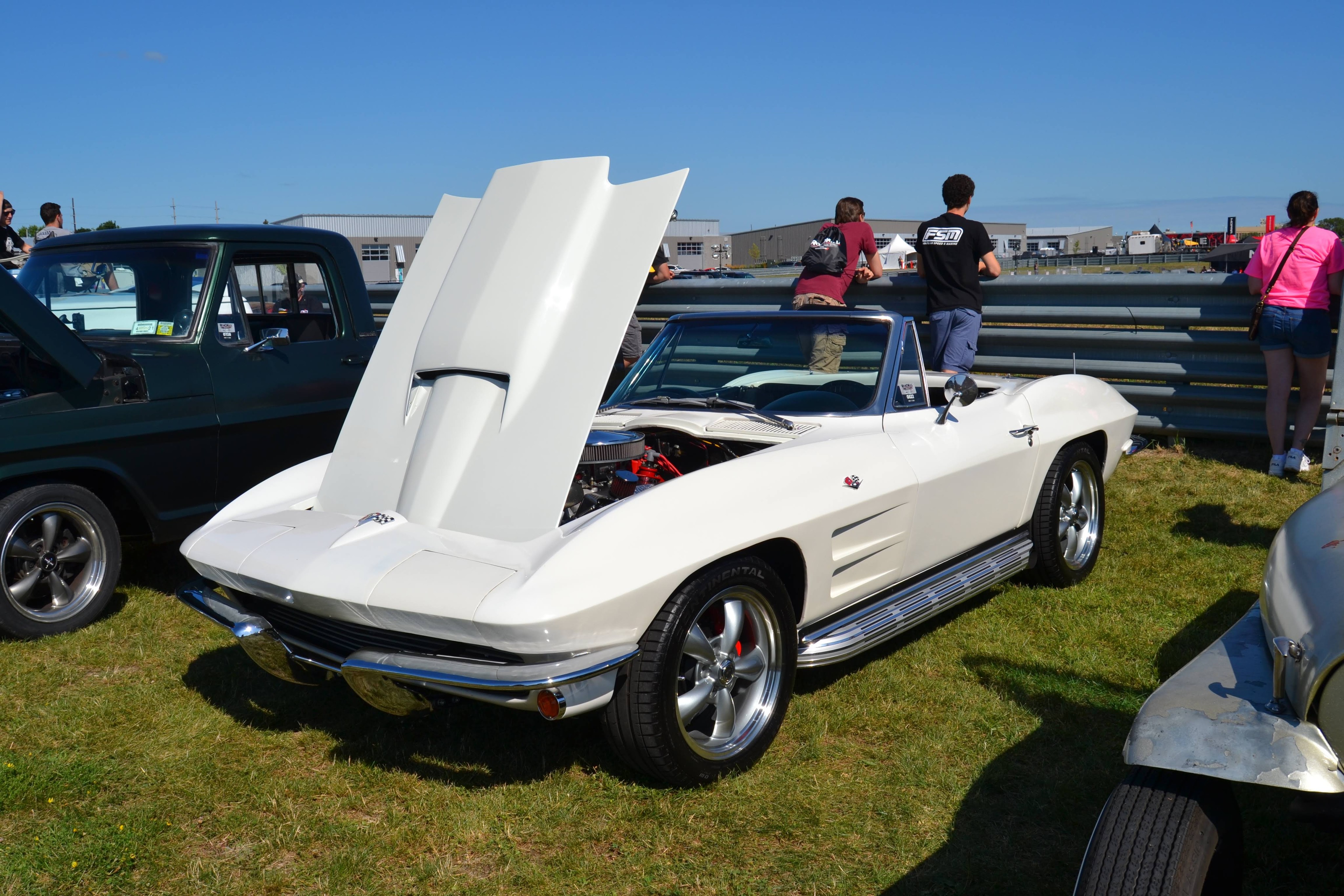 My boyfriend and a sexy cop lady

We attempted to watch some drag racing, but unless you were in the VIP section or managed to score a seat high up in the bleachers you didn’t have much luck seeing anything. We wanted to get a glimpse of the starting line, but that turned out to be pretty difficult. So we checked out some merch, I bought a t-shirt and some stickers (of course). The day was winding down. It was just about 2:30 and time for the thrill rides. When we walked to that area, the line was so long we didn’t see the end. Someone in passing said that the wait was three hours long. Hundreds of people wee standing there. But only a handful were in the fastpass line. Thank goodness. The speaker keeping the crowd entertained had a great voice. He was talking to a kid who was in line, telling him about how they burn through thousands of tires a year, just regular tires too. They are allowed to come, make a mess of wherever they’re at and then go, no clean up required. I would guess there is someone else to do that? But who knows.

It was finally our turn to go. I started to get really nervous. Uncontrollable  laughter ensued. Queue ridiculous high pitched screeching as the Charger we where in took off and whipped around the cones. Here’s a video inside the car, and some photos I took outside. 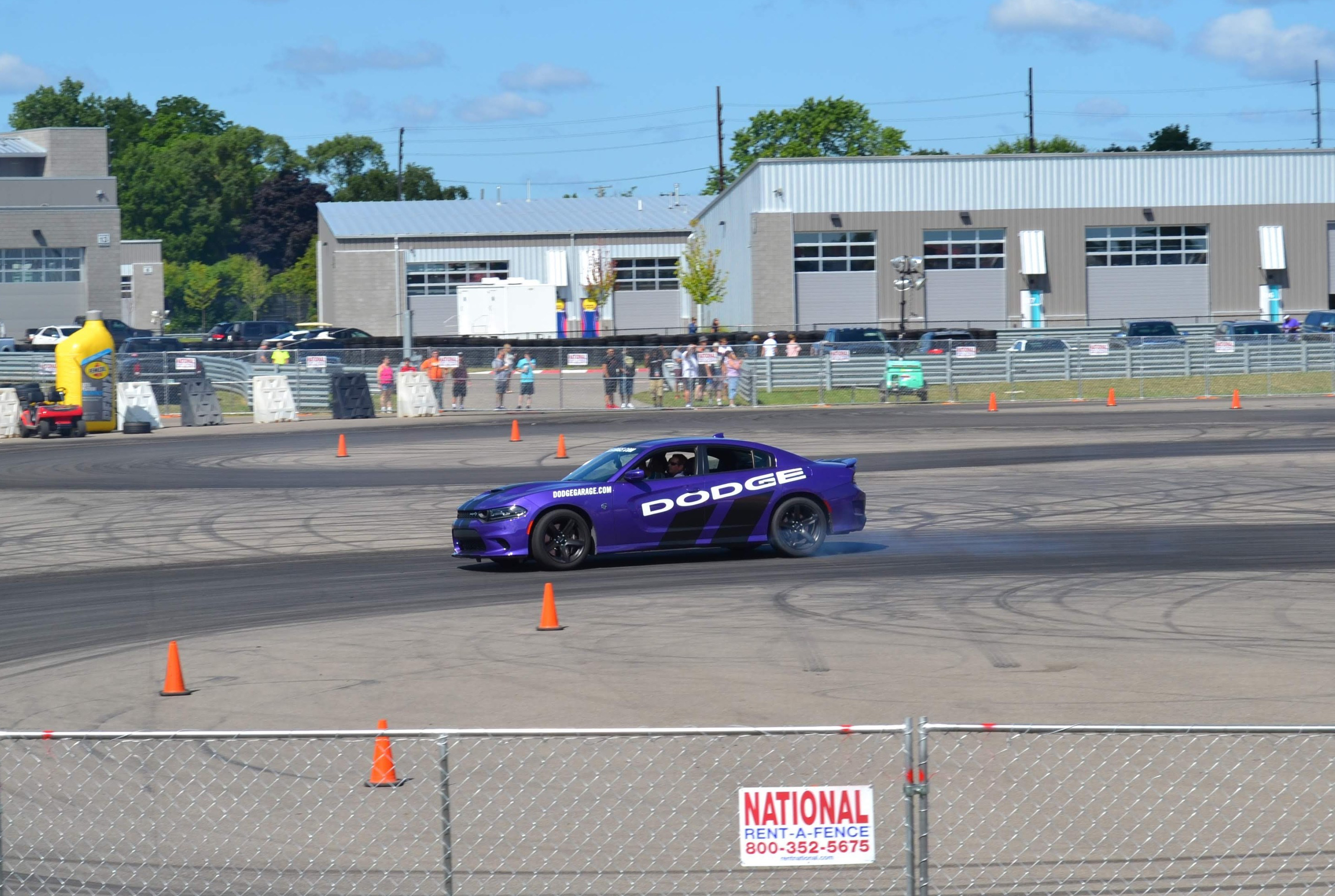 This was the ending of a ridiculously fun time. Here is the video of our time at the event.

We had seen all that we could and it was time to start the long journey back home. We took the famous 8 mile road back out. But there was one place I needed to stop before I left…

Years ago I used to watch a show called Hardcore Pawn. One of those cheesy pawn shop reality shows. I hadn’t thought about the show in years, but when I was wondering what else we could do or see while we were in Detroit, this place popped in to my head. And you can bet your ass we visited.

Maybe this isn’t cool to some people, but it was wicked cool to see. I had never been someplace that I had watched on TV. Inside was smaller than what TV made it look like, but still cool to see none the less. The owner, Les Gold, was even in the back behind the counter and I got to catch a glimpse. I was trying not to freak out, as this was just an everyday pawn shop for everyone else there. I had my fill and we left. A quick trip to Starbucks and we were back on the road.

Man, that 13 hour car ride did not seem so exciting since now we were leaving instead of going. But I was happy that we would be returning back home to the familiars of New Hampshire. It’s cool to watch how highways and scenes change from one state to the next, until you’re back where you know.

8 hours in to our excursion home, we stopped at Niagra Falls, the New York side. I know, I know, “its better on the canadian side,” but again, we couldn’t go through Canada. It was just about 6:30AM when we got there, so it was quiet, not many people were around It was the perfect opportunity to get some videos and some photos before the crowd rush came in. By the time that we reached the actual scenic view, the crowds were already starting to roll in. I did manage to grab few pictures before that though.

Breathtaking is the only way I can describe it really. I hadn’t seen anything like it before. The view of the Canadian side was nice, and I will definitely be back again to see the opposite view. Heres a quick video of us walking around, there really arent words to describe it, so I’ll show you instead.

We stopped for some yummy breakfast,

and we were back on our way home. We still had 7 hours to go.

When we finally hit Vermont, we were feeling good. Roads looked more familiar. The air was fresh. Route 9 awaited us again, and this time, not in the dark. This last video is of Route 9 through Vermont, our last stretch to home.

The experience was amazing. A last minute road trip I would not have wanted to take with anyone else. More adventures await us in the future.